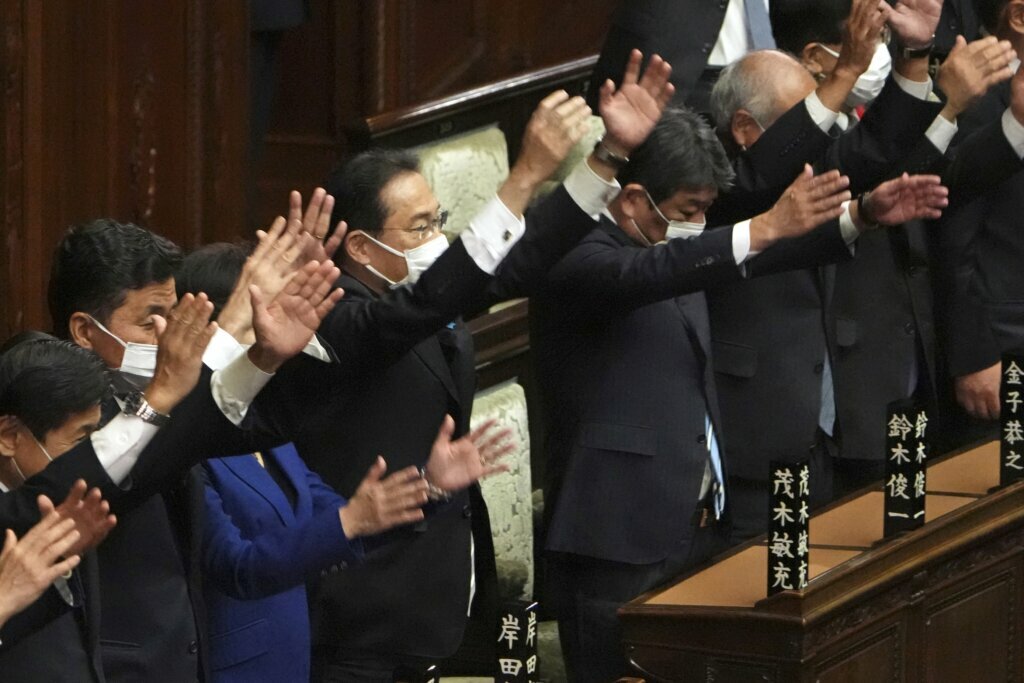 TOKYO (AP) — Japan’s new Prime Minister Fumio Kishida dissolved the lower house of parliament Thursday, paving the way for elections Oct. 31 that will be Japan’s first of the pandemic.

At stake will be how Japan faces a potential coronavirus resurgence and revives its battered economy, and if or how Kishida’s government can leave the shadow of the nearly nine years of Abe-Suga rule some describe as dominating to the point of muzzling diverse views.

Kishida said he is seeking a mandate for his policies after being elected prime minister by parliament only 10 days ago.

He replaced Yoshihide Suga, who lasted just a year as prime minister and whose support was battered by his perceived high-handed approach in dealing with the coronavirus and insistence on holding the Tokyo Olympics despite rising virus cases.

Kishida, tasked with rallying support for the ruling party, has promised to pursue politics of “trust and empathy.”

Four main opposition parties have agreed to cooperate on some policies, such as addressing gaps between the rich and the poor that they say widened during Shinzo Abe’s government and were worsened by the pandemic.

After Tadamori Oshima, the speaker of the house, announced the dissolution, the 465 lawmakers in the more powerful lower chamber stood up, shouted “banzai” three times and left. Official campaigning for all 465 newly vacant seats begins Tuesday.

The last lower house election was held in 2017 under Abe, a staunch conservative who pulled the long-ruling conservative Liberal Democratic Party further to the right while serving as Japan’s longest-serving prime minister.

In that vote, the LDP and its coalition partner New Komeito together won 310 seats, or two-thirds of the chamber.

Opposition parties have struggled to win enough votes to form a new government after the brief rule of the now-defunct Democratic Party of Japan in 2009-2012. But with weaker LDP support under Suga, the party lost three parliamentary by-elections and a local vote this year to opposition contenders.

Yukio Edano, head of the largest opposition Constitutional Democratic Party of Japan, told NHK public television that he hopes to make the election “a first step toward changing the politics.”

In his first policy speech last week, Kishida promised to strengthen the country’s pandemic response, revive the economy and bolster defenses against threats from China and North Korea. He also sought to gradually expand social and economic activities by using vaccination certificates and more testing.

Yuichiro Tamaki, head of the Democratic Party for the People, said Kishida was selfish for dissolving the lower house so early in his tenure. “It is unclear on what policies he is seeking a mandate from the voters,” Tamaki said.

He said his party will propose economic policy that seeks higher pay for workers.

“We want to create a political situation where ruling and opposition blocs are in close competition,” Tamaki said.

Copyright
© 2021 The Associated Press. All rights reserved. This material may not be published, broadcast, written or redistributed.